Summer with the Westmoreland Symphony 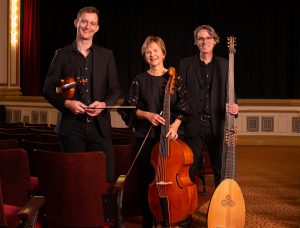 Since its founding in 1990, Chatham Baroque has become “One of the country’s most distinguished period ensembles” (Palisadian Post), and “One of Pittsburgh’s greatest treasures” (Pittsburgh Post-Gazette).

The concert will be held at Unity Chapel, Latrobe 111 Chapel Lane, Latrobe PA 15650

General admission is $15, All donations benefit the WYSO program.  Underwritten by the Charles F. and Mary Esther Sawyer Music Fund of the Latrobe Presbyterian Church. Unity Chapel is air-conditioned and accessible: parking, entrance, and restroom.

A conversation with Scott Pauley:

WSO: How did you first start playing the theorbo and lute?
SP: As a music student in college, I played classical guitar and double bass. I ended up being drawn to a lot of early repertoire from the Renaissance and Baroque periods. For some reason, this music just spoke to me. So I played it, first on the modern classical guitar, and then became interested in the older instruments themselves. So I started with a baroque guitar (the ancestor of the modern guitar) and then branched out to the lute, and then the theorbo (a 6-foot-long lute with a very long neck extension). The theorbo became my favorite instrument because it combines the best qualities of the guitar and the bass in one instrument.

WSO: What do you love about those instruments?
SP: I love how these instruments can transport people to another time and place. The theorbo is very versatile, playing very low notes and very high notes. It’s got a clear and transparent quality but can also make big and dramatic thumping sounds on the low bass strings. It’s also a conversation starter with its unusual appearance.