Due to Covid-19, the Philharmonic and Philharmonia will not meet during the fall semester. Instead, we are combining the string sections of the two orchestras into one orchestra, called the WYSO Autumn Strings.

All participants will wear masks and will be seated six feet apart. The dates are September 16 through December 9, with a virtual concert on December 9.

We plan on offering the Philharmonic and Philharmonia, with winds and percussion again in the spring semester.

The Philharmonic consists of auditioned high school musicians, who rehearse on Wednesday evenings and perform concerts each fall and spring. String students should be comfortable in first through fifth positions, have a solid knowledge of note values, dynamics, key signatures, off-the-string playing, and be able to play major scales up to 4 sharps and flats. An audition is necessary and private lessons are required. The equivalent of Suzuki book V and up. The Philharmonic also provides a Concerto Competition for members to compete to perform a concerto with the orchestra. The competition is held every January, with a spring semester performance. A WYSO Solo and Ensemble Night is offered each May, featuring individuals and small ensembles from the Philharmonic.

Congratulations to our 2020 Graduating Seniors!

Christopher Cox is a senior at Greater Latrobe Senior High School. He has played trumpet in the WYSO for the past four years and was selected to play the Hummel Trumpet Concerto for this spring semester. Christopher is also a member of the Three Rivers Young Peoples Orchestra (TRYPO) and the Pittsburgh Youth Symphony Orchestra (PYSO) and studies under Chad Winkler of the Pittsburgh Symphony Orchestra. He has also participated in numerous school concerts and PMEA festivals, attending the District One Honors Band and being selected for PMEA All-State Orchestra this year.

At Greater Latrobe, Christopher was actively involved with the National Honors Society and the Chain Reaction Contraption Competition, as well as the secretary for the Chess Club and Science Olympiad Team, and the vice president for the Physics Olympiad Club. He will be attending the Duquesne University – Mary Pappert School of Music this fall to study trumpet performance.

Yalena Craig is a senior at Greensburg Salem High School. She began playing the clarinet in fourth grade and has played the bass clarinet as well. She has been involved with WYSO for about three years. At Greensburg Salem, she has attended many WCMEA and PMEA festivals, starting in eighth grade. She has been a part of the marching band for six years and was the junior officer and commanding officer. She was also the clarinet section leader for the past two years. Outside of musical activities, she was named captain of the high school swim team which she has been a part of for the past six years.

She received the full tuition Board of Governors Band Talent Scholarship through the CALU music department. She will continue her education at California University of Pennsylvania, majoring in fisheries and wildlife biology while participating in the marching band and concert band to continue her musical pursuits.

Emma Glosner is graduating from Hempfield High School. She has played the violin for 13 years, studying with Ramona Coppage and has been a member of the WYSO since 2016.

In addition to her musical pursuits, Emma was very active in Hempfield’s sports and academic offerings. She was a member of the Girls Varsity Softball Team; winning three State Championships and five Western Pennsylvania Interscholastic Athletic League (WPIAL) titles in a row.

Emma will be attending Washington and Jefferson College in the Fall and will major in Chemistry and pre/health. 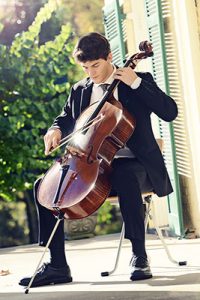 Drew Harris is a senior at Franklin Regional High School (FR).  He plays the cello in the WYSO where he was selected as a concerto competition winner performing Elgar’s Cello Concerto. Additionally, Drew is a bassist with the FRHS Orchestra and Mariachi Band. He was honored to perform the National Anthem at home swim meets and the WPIAL Swim Meet with his brother, Nathan. He studies with Sarah Ferrell.

While at FR, Drew was the captain of both the swim team and the track team and also enjoyed being a diver. Highlights of his swim career include: winning the section title, setting a new school relay record and earning All-American consideration, and is a state medalist in the 400 free relay with his fellow teammates. Drew is also a member of FAST swim team and NHS and works as a lifeguard at Meadowink Pool and the Boyce Park Wave Pool.

Drew was awarded an academic scholarship to attend Penn State Behrend in the fall where he will major in mechanical engineering and will be a member of the swim team and Honors College. Congrats Drew!

Emma Jones is a senior at Hempfield Area High School. She studies flute under Michele Boulet. Emma has been a member of the WYSO program for six years, first participating in the WYSO Philharmonia for two years, then moving to the WYSO Philharmonic. She has been playing with the Philharmonic for four years and was the principal flutist for the past two years. She has had the opportunity to play side-by-side with the WSO twice and play Devienne’s Flute Concerto no. 7 in E minor with the WYSO. In addition to the orchestra, Emma has played in numerous flute choirs and wind ensembles.

At Hempfield, Emma was president of the school’s Interact Club and was actively involved with the National Honor Society, Spanish Honor Society, and Future Business Leaders of America. She will attend the University of Pittsburgh for a dual major in Economics and Global Management.

Erica Peters is a senior at Norwin High School.  She began playing the cello in fourth grade when she lived in Arlington, Texas.  That summer she moved to North Huntingdon where she studied cello under Katya Janpoladyan and played in her school orchestra, including the high school select orchestra during her sophomore and senior years.  She was the principal cellist in the WYSO for the past two years and also had the chance to play a side-by-side concert with the WSO her junior year as well as the Summer Philharmonic last summer.  At Norwin, she has participated in multiple PMEA performances as well as a Music in the Parks competition in Hershey during her sophomore year, which the orchestra won in the string orchestra category.  She also played with the sixth-grade county chorus this year as a soloist for one of their songs and frequently plays with her church choir.  Outside of the orchestra, this year she was the captain of Norwin’s Science Bowl Team and is also on the math team.  She will be attending the University of Pittsburgh in the honors college for pre-pharmacy with intent to attend the University of Pittsburgh Pharmacy School to which she has guaranteed acceptance. Congrats Erica!

Dirk Wynn is a senior at Ligonier Valley High School. A member of WYSO for the past two years, he has played clarinet and oboe with the orchestra as needed. At Ligonier, Dirk was a member of the Concert, Jazz, and Marching bands. Musical theater was also a big part of Dirk’s high school life, besides playing in the pit, Dirk was the student director of the school musical for the past two years.

A highlight in Dirk’s acting career was playing Wadsworth in “Clue.” He was the recipient of the Theatre Award for Achievement in the Arts and was Student of the Month in Arts and Academics. Dirk was also Captain of the Quiz and Science teams, Theatre Guild President, National Honor Society Secretary, National Art Society member, and a member of the Reading and Engineering teams. He was also a founding member and President of the Gender and Sexuality Alliance.

Dirk received the Ralph Kurtz, LVEA, and the Mellon Family Endowment Scholarships and he will attend Chatham University in the Fall to study Music Education and Theatre.

Celebrate the Season with Home for the Holidays

The Westmoreland Symphony Orchestra presents Home for the Holidays on Saturday, December 19, 2020 beginning at 7:30 p.m. The digital concert will be live-streamed from the Palace Theatre in Greensburg. The WSO will perform holiday classics including Joy to the World, The First Noel, Deck the Halls and popular tunes including Christmas Time is Here from the 1965 program “A… Read More

The Westmoreland Symphony Orchestra presents Back to Bach on October 24, 2020 at the Palace Theatre in Greensburg, beginning at 7:30 p.m. The digital concert will be live streamed. The WSO is pleased to announce a new collaboration with the Carnegie Museum of Art for a very special performance on Opening Night. As the WSO musicians perform George Walker’s “Lyric… Read More

The Westmoreland Symphony Orchestra presents “Live on the Lawn” Friday evening September 25, 2020 beginning at 7:00 p.m. at the Hempfield Park Amphitheater.  The event features Beo String Quartet including violinists Jason Neukom and Aviva Hakanoglu; Sean Neukom, viola and Ryan Ash, cello. Guests are limited to 250 and must pre-register for the event. Please bring chairs or blankets and… Read More