Enjoy a vibrant musical evening when the WSO takes you into the ring for The Bullfighter’s Prayer, whisks you away for a tour of The Four Seasons of Buenos Aires with the return of stunning soloist Chee-Yun and inspires with the “Spanish Mozart” Arriaga’s Symphony in D Major.

“Our next concert takes on a decidedly Latin flair with a fascinating and brilliant symphony by little-known Spanish composer Arriaga. The music certainly takes its cues from the wit of Haydn and Mozart, the beauty of Schubert, and reveals a sunny charm all of its own,” said Artistic Director Daniel Meyer. “We then get into the mind of a bullfighter just before he takes the ring and faces a worthy adversary in Turina’s ‘Bullfighter’s Prayer.‘ Our concert finale brings back audience favorite Chee-Yun to the stage as she performs Argentinian composer Astor Piazzolla’s Four Seasons of Buenos Aires. Inspired by Vivaldi’s take on the same subject, Piazzolla’s music teams with tango spirit and violin pyrotechnics that is bound to amaze us all.”

Violinist Chee-Yun flawless technique, dazzling tone, and compelling artistry have enraptured audiences on five continents. A winner of the Young Concert Artists International Auditions and a recipient of the Avery Fisher Career Grant, Chee-Yun has performed with many of the world’s foremost orchestras and conductors. Orchestral highlights include her tours of the United States with the San Francisco Symphony under Michael Tilson Thomas and Japan with the NHK Symphony. Chee-Yun has also received exceptional acclaim as a recording artist since the release of her debut album of virtuoso encore pieces in 1993.

Chee-Yun has performed frequently on National Public Radio’s “Performance Today” and on “A Prairie Home Companion,” Public Radio International, and numerous syndicated and local radio programs across the world. In 2009, she also appeared in an episode of HBO’s hit series “Curb Your Enthusiasm.”

This is Chee-Yun’s second appearance with the WSO, she performed as part of the 50th Anniversary Concert season in 2019. 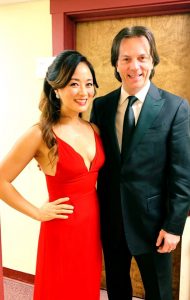 Summer with the Symphony!

The WSO Board is pleased to announce their selection of Natalie Ann Kasievich as the new executive director. Ms. Kasievich’s education includes a bachelor’s degree in Organizational Leadership from Wheeling Jesuit University and a master’s degree in Public Management from the H. John Heinz III College, Carnegie Mellon University. Her most recent position was as an Engagement Leader for Thrivent… Read More

UPDATE: Out of an abundance of caution the WSO Chamber Singers and soloists will not be performing Beethoven’s Mass in C. The concert will go on as scheduled, with the WSO performing Beethoven’s Symphony No 2 (orchestra only) in its place along with Bach’s Suite in G Minor and Hilary Tann’s With the Heather and Small Birds. We look forward to welcoming… Read More

The Westmoreland Symphony Orchestra presents their 53rd season finale Beethoven’s Brilliance on Saturday, April 23, 2022 at the Palace Theatre in Greensburg, beginning at 7:30 p.m.  The concert opens with Bach’s Suite in G minor and Welsh composer Hilary Tann’s nature-inspired With the Heather and Small Birds and concludes with Beethoven’s Mass in C. “Beethoven’s Mass in C is a… Read More